"The Legacy of Salomon Maimon: Philosophy as a System Actualized in Freedom", Journal of Philosophical Research 41(2016), 453-498

By Karin A. Nisenbaum 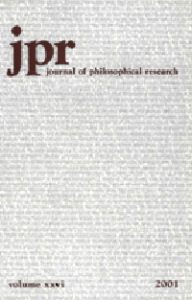 It is no longer disputed that Salomon Maimon decisively influenced the emergence and development of post-Kantian German Idealism. Yet there is far less consensus on how to interpret most aspects of Maimon’s thought, including the nature and philosophical significance of his skepticism and the reasons that compelled him to challenge Kant’s transcendental deduction of the categories or pure concepts of the understanding in the Critique of Pure Reason. In this article, I argue that the two ideas that define Fichte’s doctrine of science or Wissenschaftslehre-the necessity of a common derivation of all a priori knowledge from one principle, and the idea that philosophy should be based on freedom-can be traced back to Maimon’s Essay on Transcendental Philosophy. I also argue that, by emphasizing the regulative role of the ideas of pure reason in Kant’s account of empirical cognition, Maimon enables a rereading of the argumentative structure of the first Critique that reveals the relationship between sensibility, understanding, and reason. This rereading of the first Critique shows that Kant has the resources to address Maimon’s key challenges, but it also puts pressure on his discursive account of human cognition.